Image: Photograph of the filmed interview with François Ede (February 2019)

In February 2019, André Gaudreault and Laurent Le Forestier carried out filmed interviews with Jacques Malthête and François Ede at the Cinémathèque universitaire of Université Sorbonne Nouvelle – Paris 3. An expert on the work of Méliès, Jacques Malthête provided invaluable information about stop-camera trick effects and negative and positive film joining. François Ede, for his part, brought to the table his experience as a director of photography and film restorer to speak about the relations between shooting and editing, film development, printing and colour timing techniques, movie theatre projection and the cumbersome labour of repairing and re-editing they involve.
Several other filmed interviews have been shot over the past few weeks:
• Sabine Lenk and Frank Kessler visited the French collector Patrice Guérin for a demonstration of some of the pre-cinema devices in his collection;
• André Habib met with Philippe Léonard in the studio of the Montreal experimental cinema collective Double Negative to film demonstrations of the possibilities for creating on film using a contact printer, an enlarger and a JK optical printer;
• André Habib also interviewed Samy Benammar in the Université de Montréal mixing booth about glitch art and the many creative possibilities in reusing a digital video file;
• a member of the Montreal section of the doctoral committee, Hubert Sabino-Brunette, in collaboration with INIS, carried out a filmed interview with Fernand Dansereau, a major figure in Quebec cinema;
• finally, in March 2019 the Lausanne section of the doctoral committee, in collaboration with Écal, interviewed the director of photography Renato Berta, a frequent collaborator of Alain Tanner, Louis Malle, Alain Resnais, Amos Gitai and Jean-Marie Straub and Danièle Huillet. 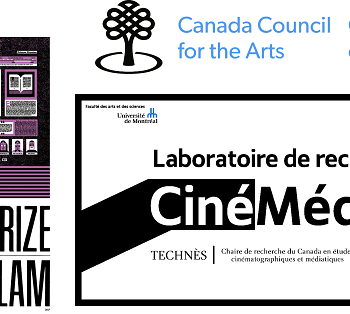 An honorary doctorate for André Gaudreault 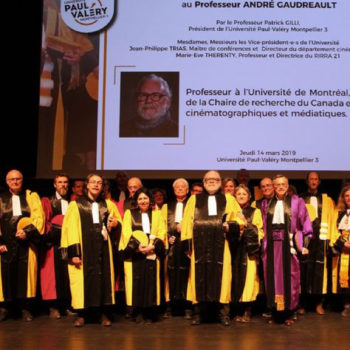